Good Chop is a new monthly meat subscription service that ships boxes of meat that you can fully customize. This means that you can choose the exact cuts of meat and seafood that you want in your box. For instance: in the medium box plan you get to choose 6 cuts of meat and seafood. If you want to choose to only have 6 packages of filet mignon in you box, then you can do so, and the price of the box would be no different than if you chose to select all 6 packages as pacific cod.
As it is a monthly subscription, customers need to remember to select their cuts each month - if they forget to make their selections in a given month, they'll receive a default selection box.
The menu options from which customers choose their meats change, but mostly Good Chop says that they are mostly adding new products, and not taking products off very often. Some additions coming soon include:

At the time of this post, you can can get $80 off of your first three boxes by heading to the this page: https://www.goodchop.com/plans,
Good Chop sent a sample box for me to review.  Check out the video for my thoughts and for a quick recipe for the pork chops that were included in my box.
Video Published on 9/17/21

I had two beef plate ribs from 44Farms and I seasoned one with HeyGrillHey's Beef Rub and the other with Meat Church BBQ’s Holy Cow rub to find out which one my family prefers.

None of the products mentioned below or in the video paid for a sponsorship or a product mention.

Please consider supporting the channel through the affiliate links below. While I will receive a small commission, you will not pay more for products purchased via the links below.

My favorite knives are made by Dalstrong! Click the link below to receive $10 off your order of $80 or more!

Sign Up for Butcher Box & Receive $30 off with the link below:

I bought Tappecue's AirProbe Deluxe Bundle around 3 weeks ago. The bundle includes the Tappecue Touch unit, a power supply for the Touch, two wireless AirProbes and charging cradles and a Getting Started Guide. I have been familiar with the Tappecue brand for years and I knew that they were the first company to make a wi-fi enabled BBQ thermometer but I had never made a purchase from them.

A few years ago I had an unfavorable experience with the Meater Block. I love the concept of having a wireless probe to measure the internal temperature of my food and the temperature of the inside of the cooking chamber, I've just been waiting for a company other than Meater to "get it right".  I believe that ads for Tappecue's AirProbe wireless thermometer started appearing in my Facebook feed early in 2020. I was an early supporter of Meater's Kickstarter campaign and I waited over two years for the product to land on my doorstep..... I vowed not to be one of the first to purchase the AirProbe.

As the year progressed, I did not hear much about the AirProbe on social media, no overwhelmingly great reviews but nothing negative either. Tappecue's reputation seems to be solid but the company doesn't appear to receive the same buzz in the BBQ community as Fireboard and ThermoWorks. Tappecue struck me as a company with a small but loyal following of consumers who have probably experienced their older products.

After Thanksgiving, I saw Tappecue's promotion for the AirProbe Deluxe so I decided to give it a try and placed my order. My package from Tappecue arrived shortly thereafter, but it fell off my radar some as I had also purchased the Weber Summit Kamado around the same time. I made videos of my initial impressions of the grill and a few days later, I made a follow-up video describing my discussion with a Weber executive about their plans to replace the early Summit Kamados with new grills with a sturdier stand.

Around Christmas, I finally got around to cooking on my Weber Summit Kamado for the first time. I thought it would be a good idea to also unbox my Tappecue Touch and the AirProbes and try them for the first time during that same cook. Unfortunately, my initial experience with the AirProbes did not go very well. The setup appeared to be smooth until I tried to connect my AirProbes to the Touch and my iPhone. I continuously received error messages on the AirProbe Direct screen (for a direct Bluetooth connection) in the Tappecue app. I then tried to connect the AirProbes to the Touch. While the Touch seemed to give me some readings from the green probe, I later realized that the green probe readings were not from my green AirProbe. To this day, I still don't know what the Touch was "reading" from the green probe since my AirProbes are the only Tappecue probes that I own and they weren't connecting.

Nonetheless, I figured that I must have been overlooking something in the setup process so I shut everything down until I could try connecting the AirProbes on a different day.

Once connected, I inserted the AirProbes into my small Prime Rib that I was smoking on my LSG 20" offset smoker. 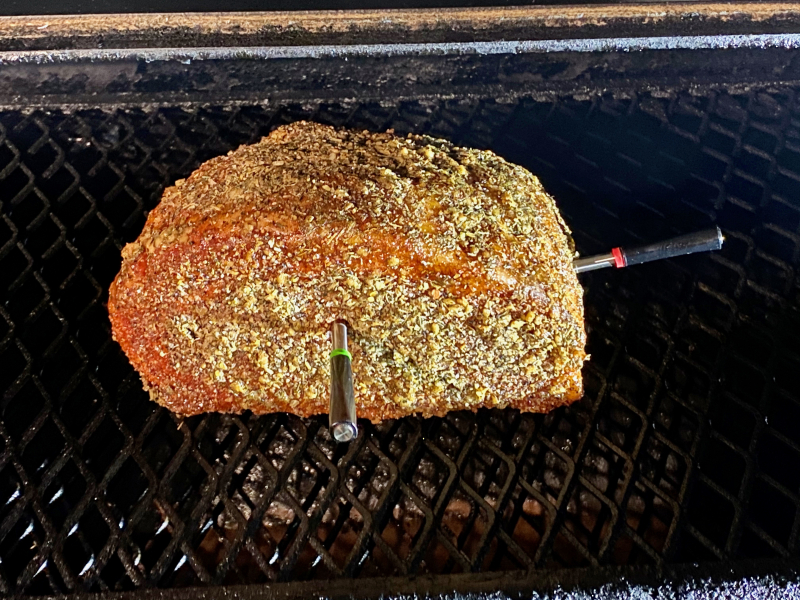 The green probe connected to the app right away and gave me temperature readings for the meat and the cooking chamber but the red probe was stuck on "connecting". I figured the red probe would connect after 10 or 20 seconds. Meanwhile, Luna - my 9-week old German Shepherd puppy looked like she had just pooped and was sniffing around it so I immediately rushed over to her which was probably around 30-40 feet away from the smoker. 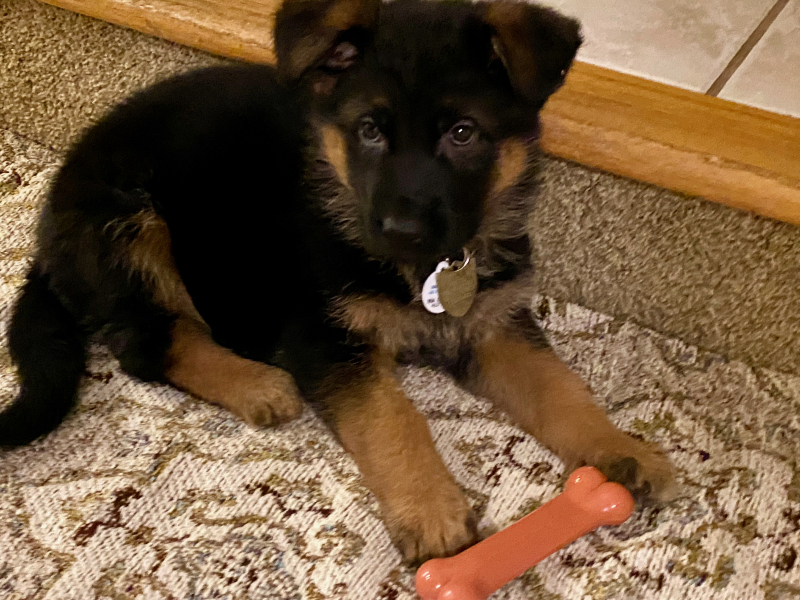 After I cleaned up after Luna, I noticed that the app was showing that I was no longer connected to either AirProbe. I walked back to the smoker hoping that at a minimum, the green AirProbe would reconnect on it's own but it didn't. I waited a few minutes and I tried to force the app to reconnect but the app would not reconnect. Instead the app showed both AirProbes as "connecting".

All of this made me wonder if the AirProbes are unable to reliably remain connected because of the thick steel in the LSG that does an excellent job of holding temperatures inside of the cooking chamber. I went onto the Team Tappecue fan page on Facebook and asked if others had a sense of how well the AirProbes function inside of well made offset smokers like the LSG. One person replied that he wasn't sure about functionality with stick burners, but  in using the AirProbes with his Assassin grill, he needed to make sure that the Touch unit was within 7-10 feet of the grill.

This was a big relief for me as I really want to like this product. Even if I can't use them inside the thick walls of the LSG, I'm hopeful that they will work inside of the Summit Kamado or inside of my other grills. Next time, I will use the AirProbes with the Touch and I will keep the Touch close to the smoker.

As such, my grade with the AirProbes and my stick burner is still an "incomplete" so there will need to be a Part 2 to this post. Unless I overlooked something in the setup process, it appears that the Touch should not be turned on when you initially try to connect your AirProbes to the app and your phone. If you have experienced something different, please leave a comment.

Here's a photo of the finished Prime Rib on the LSG. 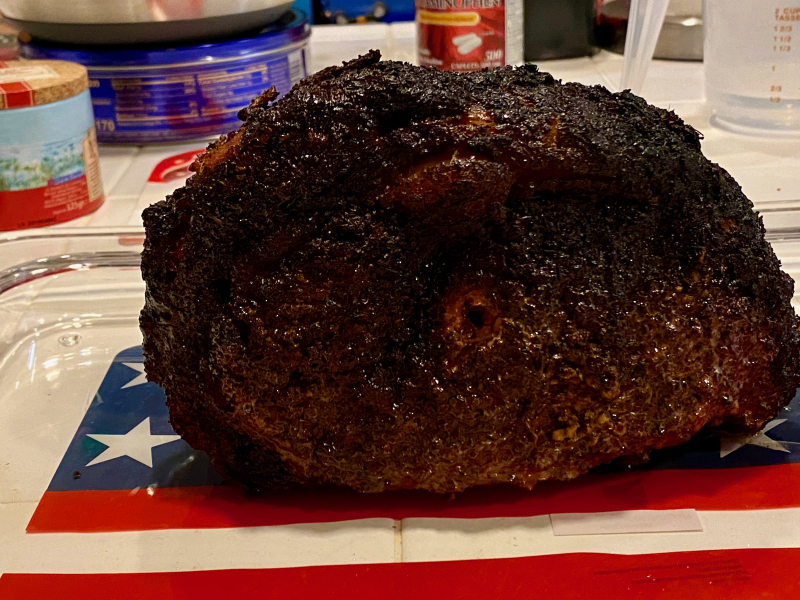 The first cook on my new Weber Summit Kamado was a success. I did Poor Man’s Burnt Ends  & I officially fell in love with the WSK when I saw that smoke ring. Making micro adjustments for the temps was a breeze. Now I can understand why these grills are widely praised by everyone who cooks with them. 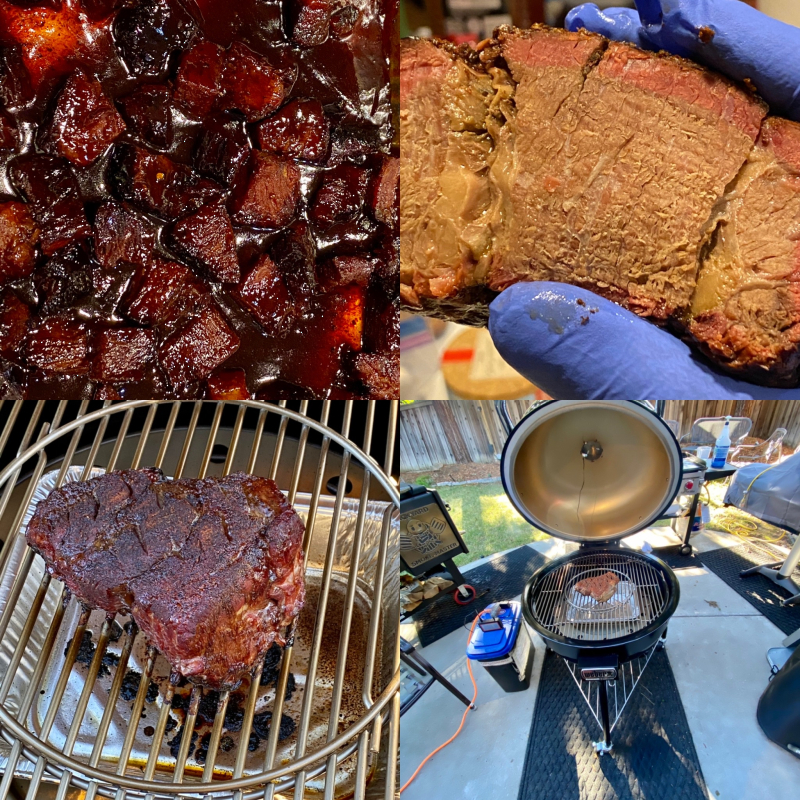 Kenyatta demonstrates unboxes & installs MAK Grills FlameZone retrofit kit for his #MAK 1 Star General. Easy step by step instructions are included along with an explanation of how the FlameZone facilitates 2-zone cooking on the MAK. For the maiden cook with the FlameZone, Kenyatta used his #GrillGrates and fired up a few #smashburgers If you already own an older model 1 Star or 2 Star General, do yourself a favor and retrofit your MAK with the FlameZone. You will no longer need to consider buying a new pellet grill that claims to smoke & grill because your MAK can do both!

I’ve had my Weber MasterTouch kettle longer than all of the other grills/smokers that I currently own but I’ve been using it less and less with every new smoker that I’ve added to my backyard arsenal so I’ve been wanting to breathe new life into it.  The Slow N Sear has long been considered one of the best accessories available for Weber kettles so I finally took the leap and purchased one.

The MasterTouch comes with a cooking grate that allows the center portion to be removed for other accessories like a griddle or wok. The Slow n Sear is designed to sit on either the far left or far right side of the kettle. This means that I would have to lift the entire grate up (with food on it), if I ever needed to add charcoal, wood chunks or water during a cook. This fact slipped my mind when I ordered my Slow n Sear so unfortunately I couldn’t use it until I bought another grate with a hinge that allows the side portion to be lifted or removed for the addition of fuel during the cook.

I settled on the Easy Spin Grill Grate which is also made by SnS Grills. After waiting a few weeks I finally had everything setup to use my Slow n Sear for the first time.

For the first cook, I decided to smoke some beef short ribs. I followed the instructions and I started with a dozen lit coals. It took around 20 minutes for the lit briquettes to ash over, then I added a chimney full of unlit briquettes. I added two chunks each of pecan and cherry wood. Finally, I poured four cups of hot water into the reservoir and I setup my FireBoard to measure the temperature inside the kettle at the grate level.

It didn’t take long to get the kettle hot enough to add the beef short ribs. From there, I only needed to make small adjustments to the top and bottom vents to keep the internal temperature between 225 and 275 degrees.

The ribs cooked efficiently within 4 hours. I prefer not to cook with a probe inside the meat so I probably could have pulled the ribs after 3 hours and 45 minutes.

Here is a link to the FireBoard session with my notes and a few photos from the cook. 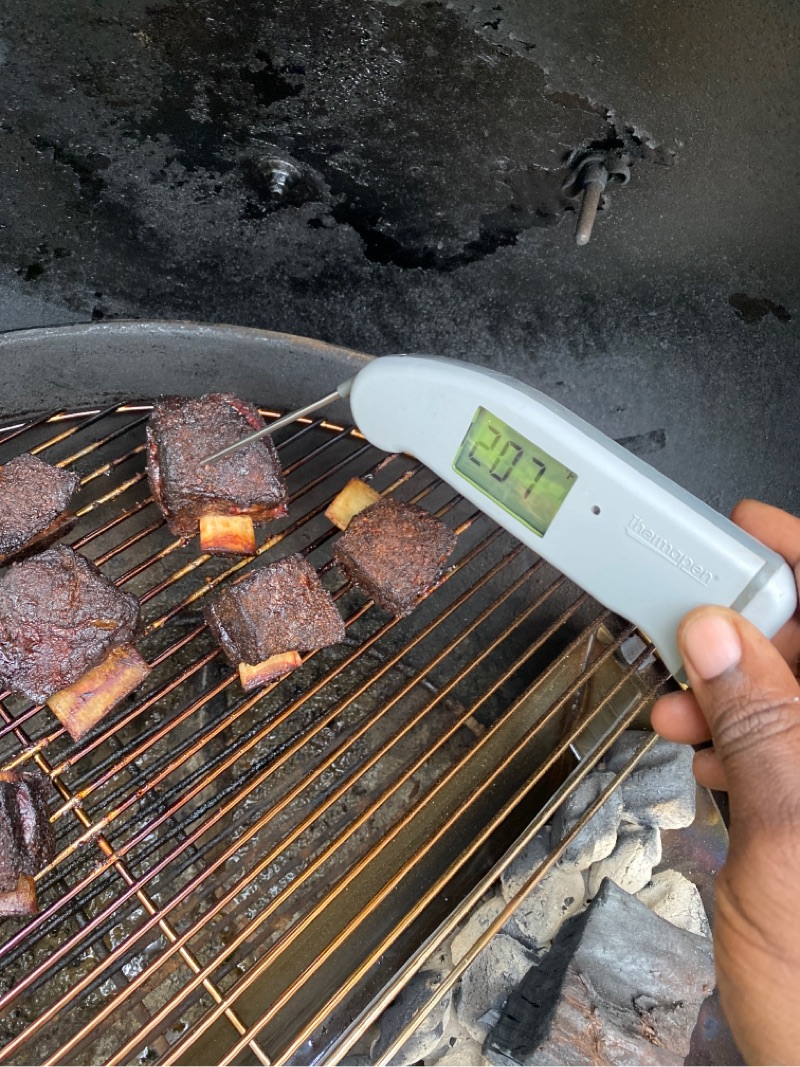 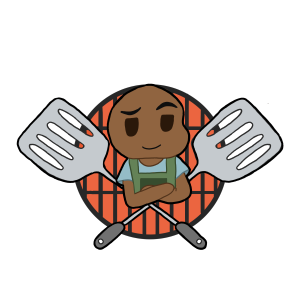